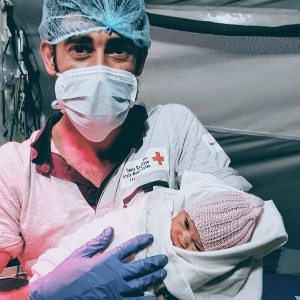 Together we can
reach the goal

Since the 25th August 2017, extreme violence in Rakhine State, Myanmar, has driven an estimated 693,000 Rohingya refugees across the border into Cox’s Bazar, Bangladesh. There are now an estimated 914,678 Rohingya refugees in Cox’s Bazar. Generations of statelessness imposed vulnerabilities on these people even before the severe traumas of this most recent crisis. The people and Government of Bangladesh welcomed them with resounding generosity and open borders. However months later, refugees remain forced to rely upon humanitarian assistance for their basic needs. The living conditions of the refugee population remain extremely vulnerable. These are explained by many factors including the clustering of populations in hastily constructed settlements clinging to steep, rapidly deforested hillsides, overcrowding, insufficient food, and poor water, sanitation and hygiene

Red Cross has launched a Bangladesh/Myanmar Crisis Appeal and is doing everything it can to help people caught up in the violence on both sides of the border. They are offering first aid and medical care, organising emergency shelter, providing food and safe drinking water, and are working to establish safe spaces for women and children who may be vulnerable to abuse and exploitation. And they're reconnecting families who became separated as they fled, as well as helping people learn the fate of their loved ones.

So I'm fundraising for Red Cross to help their efforts and I'd love your support.

Thank you to my Sponsors

Hoping this will help in some small way. You are amazing JP!

Good on ya JP!

Great cause JP! Best of luck for fundraising.

Hey JP sorry I did not make it to drinks. Good luck on this trip, well done on the amazing work you are doing.

Sorry I couldn’t make it to the fundraiser event. So proud of you JP! Keep helping people & doing what you’re doing you amazing soul. Be safe & please look after you first. Lots of love to you my compassionate friend xo

Safe travels mate and keep making a difference to the world. Proud of ya!

Great work JP - you always go above and beyond for those in need! Xo